In this video, Dr. Okanoya’s hypothesis is that Evolution of song complexity in finches might mirror evolution of language in humans.

The origin of the human capacity for Language is a central question and any small step towards an answer would be a towering achievement. Unfortunately, Dr. Okanoya’s work does not accomplish that. As neither a sub-species of White-rumped Munia nor a strain of Bengalese is specified, the experiment can’t be reproduced. Since the White-rumped Munia used didn’t receive appropriate care, the observations very likely only reflect that flawed husbandry. Also, there’s no recording of the White-rumped Munia song in the natural state.

There are a number of different sub-species of White-rumped Munias and a constellation of domestic varieties. In the research reviewed in the video, the wild birds are defined as from three locations in Taiwan. This was not done in previous song complexity research by Honda and Okanoya:
http://www.bioone.org/doi/pdf/10.2108/zsj.16.319
It’s stated that “White-backed munias were caught in the wild and imported through Hong Kong. We obtained White-backed Munias from two different pet suppliers.”
Were the White-rumped Munias shipped from Hong Kong also collected there and so a single-subspecies? Or, were the birds from a number of locations with different sub-species? Since the White-rumped Munia is a major species in the Chinese Prayer Bird Trade,
http://www.kfbg.org/upload/Documents/Free-Resources-Download/Report-and-Document/BirdMarketReport_20111027.pdf
it’s quite possible that the birds belonged to a number of different Lonchura striata sub-species from outside Hong Kong.

That there are various Bengalese stocks that trace back to different Lonchura striata populations, Taka-Tsukasa notes here:
THE AVICULTURAL MAGAZINE — THIRD SERIES. VOL XII., 1921.
https://archive.org/details/avicultu1213319211922avic
The Bengalee can be easily crossed with any of the other varieties
of its kind, or such Mannikins as the Sharp-tail Finch and ‘Spice
bird.
# # #

More recently, European bird breeders produced a hybrid strain of Bengalese finches. The details of this program are not known.

Okanoya has shown that there are genetically distinct types of the domestic Bengalese:
http://tinyurl.com/p7rulvp

Were all the different domestic varieties tested for song complexity? Were they found to be identical? 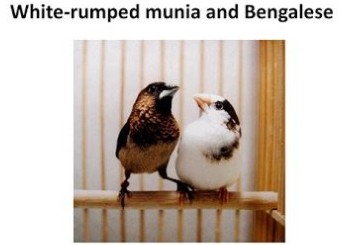 The speculation that birdsong is somehow similar to human language is intertwined with the surmise that self-domestication was a feature of human evolution. Is one hypothesis being used to prove another?

We are shown a picture of a Bengalese and are told that “It looks like very white and very domesticated.” How exactly do the Bengalese look domesticated? Yes, white mice are domesticated, but there are many other colors of domestic mice. The bird shown is a heavy pied and indeed there are all-white Bengalese, but these are not the most common. Many Bengalese are lightly pied (mostly dark) or even completely dark. An attempt is being made to fit the Bengalese into the Domestication Syndrome chart. The pied color variety is a match, and probably increased reproductive capacity, too. Most of the other features listed either are not applicable (“floppy ears”) or are not found in the Bengalese. The discussions of domestic animals in the CARTA talks are about retained infantile traits in comparison with human evolution. White plumage is not an infantile trait in White-rumped Munias.

The research in the video appears to be reflected here:
http://rsbl.royalsocietypublishing.org/content/9/6/20130842

The wild-caught birds are not properly maintained. Here:
Ecological correlates of song complexity in White-rumped Munias
https://benjamins.com/#catalog/journals/is.13.2.05kag/details
the initial handling of the wild-caught birds is described:
To record songs of White-rumped Munias, we set mist nets and captured males . . . Birds were marked with colored leg rings. Because the birds were stressed when they were captured,they did not sing right away; therefore, we kept them for a few weeks to months to ensure they were habituated to the captive condition.
. . . The birds captured in 2007 and 2008 were kept in an indoor space in each capture site for about a week before recording. The situation of the captive environment was the same as the outdoor climate and daytime. All birds that were captured from the same area in the same year were kept together in large metal cages. In the captive condition, they were provided with finch seed mixture and
water ad libitum.
…
# # #

Exact coordinates are given for the collection sites, so it might be possible to verify the subspecies / race used. Prayer Bird release is also practiced in Taiwan. As these might be other subspecies of Lonchura striata, just knowing the location may not be enough for identification. Each bird should have been banded with a coded / numbered band. That way, there would be no questions about the identity of any particular bird or its original location. It also would have been good if photos were taken of each bird, both the wild Lonchura striata and the domesticated Bengalese used in the study.

Was any attempt made to observe the Lonchura striata in nature to determine the song complexity there? If yes, were recordings made? Did the song of these birds in nature show the same lower level of complexity as heard in the laboratory?

It’s not reasonable to expect wild-caught birds ever really to habituate to a cage or even a small flight. Every living thing tries to remain so and then to reproduce. That captive animals don’t die and manage to produce offspring demonstrates only that husbandry is at least minimal, not optimal. There’s no reason to expect the behavior of wild animals in captivity to be the same as in the natural state.

Unfortunately, as dimensions are not given, it’s impossible to know what’s meant by a “large” metal cage. The large flight cage shown here
http://youtu.be/veXLjfD2Gpw?t=5m59s
is very roomy for a small group of the domesticated Bengalese, but is inadequate for wild-caught White-rumped Munias. To expect to observe behavior that’s a fair approximation of what one might see in nature, each pair of wild-caught White-rumped Munias should be kept in a planted flight of perhaps 1.25m X 2.25m X 2.25m. It also would be good to find out how far these birds nest from each other in the natural state. If they don’t nest within sight of each other, then flights, at the very least, can’t be adjoining.

Unless an attempt is made to provide something like an environment suitable for non-domesticated birds, what’s very likely to happen is that a corrupted (neurotic?) variant of behavior will be delivered.

Another factor is the constant stress that a strange and unnatural environment engenders.
These responses, although temporary defense mechanisms against specific stimuli, place a bird in a state of general nonspecific stress, in which growth rates and resistance to many diseases are diminished.
Physiological Stress in Birds, H. S. Siegel
http://bioscience.oxfordjournals.org/content/30/8/529.short
There’s no reason to expect “that domesticated songbirds have reduced CORT levels because of reduced levels of environmental stresses (compared to wild conditions).”
http://www.ncbi.nlm.nih.gov/pubmed/22927235
What’s very likely is instead for the wild-caught White-rumped Munias to have increased CORT levels because of the stress of a strange environment — captivity. This won’t change after a few generations of nests in a cage. The White-rumped Munias will continue to find life behind bars stressful for generations, indeed until a domesticated strain is developed. Another source of stress is if the wild-caught White-rumped Munias either are afflicted by disease / infested with parasites when collected or if the birds become infected from the Bengalese.

Avian malaria has been shown to be detrimental to canary song.
http://www.ncbi.nlm.nih.gov/pmc/articles/PMC1559907/
Other diseases might have the same effect.

Here
http://www.bioone.org/doi/pdf/10.2108/zsj.16.319
Okanoya states that
Singing is costly in two terms: the cost of being preyed upon while singing, and the cost of singing itself. Male birds are at a risk of predation when engaging in singing (Ryan et al., 1982; Yasukawa, 1989)

Concerning increased risk of predation, the first reference
http://www.sbs.utexas.edu/ryan/Publications/1980-82/1982AmNat119-136.pdf
Bat Predation and Sexual Advertisement in a Neotropical Anuran
Michael J. Ryan, Merlin D. Tuttle, A. Stanley Rand
discusses bats tracking frogs at night. This has no relevance to the behavior of any bird during the day.
The second reference
http://www.sciencedirect.com/science/article/pii/S0003347289801186
The cost and benefits of a vocal signal: the nest associated ‘Chit’ of the female red-winged blackbird
Ken Yasukawa
is concerned with the raiding of nests at a location that’s revealed by the hen’s call. This paper has no relevance to the singing of a courting male White-rumped munia.

I don’t know of any significant predators of song birds that hunt by
sound. My understanding is that hawks use sight. I’ve never seen
cats stalking a singing bird. Cats when hunting birds seem only
to use sight (unlike when seeking rodents where sound and air currents come into play) and target those feeding on the ground. Snakes generally focus on odor to detect prey.

Song birds can perform hidden in foliage. And for those that do their singing on a highly visible stage, it will be high up and far away from cats and with an eye towards the sky for hawks. Birds preyed on by hawks (and falcons) are very aware of the presence of danger. Just walking down my block in Jersey City, from time to time I’ll notice the absence of pigeons, starlings or sparrows — all generally common. Almost always then if I look up, I’ll see a bird of prey — perhaps just as a very small figure way up overhead.

Here
http://www.bioone.org/doi/pdf/10.2108/zsj.16.319
Okanoya states that
Singing long, complex songs also have physiological cost.
but in the paragraphs that follow, there are a number of additional speculations, not proofs.

In the video above, Dr. Okanoya states:
When a female is paired with a guy with nice song, that female decides to allocate more reproductive resource to that mating.
which appears to reflect this research:
http://www.ncbi.nlm.nih.gov/pubmed/15313802
It would be interesting for another lab to perform the experiment again and have the hormone levels checked by an avian veterinarian. Bengalese finches normally are focused on reproduction, with nothing besides basic care needed to stimulate that:
Society finches possess an exceedingly strong breeding desire.
http://www.petcraft.com/articles/2015/01/10/foster-parenting-lady-gouldian-owl-finches/

Even though Bengalese are fine models for learned vocalization, this species poses complications for comparing a domestic species to a wild ancestor. The connection between the various sub-species of the White-rumped Munia and any particular strain of Bengalese might very well elude definition and require interpretation instead. To allow for the results of an experiment investigating a difference between wild Lonchura striata and the domestic Bengalese to be repeated, the population of the White-rumped Munia and the strain of Bengalese must be specified. Better species to use might be the Australian Zebra Finch (Taeniopygia guttata), hybrids of which are not common and generally are easily recognized, and the Budgerigar (Melopsittacus undulatus), with hybrids either unknown or exceedingly rare. Both of these species are very common in the wild and definitely are the source of the domestic birds. One drawback is that Australia does not allow exports, so research on the wild populations would need to be done there.

One thought on “The Bengalese finch, domestication and the origin of Language — Comments on Okanoya’s hypothesis”

Comments on avian research — focusing on bird song and influenza